Running iOS and Android apps on Windows 10: Innovapptive apps will be ported as Windows universal apps 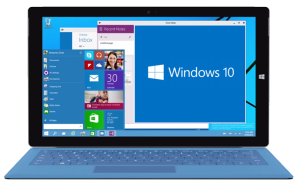 What is the need for Microsoft to support iOS and Android apps?

Microsoft wants Windows 10 to be a development target for Android and iOS developers. And by making such apps portable will encourage developers to support its own software. Apart from that, it is expected that consumers who are otherwise averse to Windows operating system due to lack of applications will instead adopt Microsoft’s platform. The goal seems reasonable, particularly when the chunk of the market (96.3%) is currently dominated by iOS and Android applications.

Windows 10 offers the flexibility to eliminate the complete code rewrite, which means Microsoft has SDKs in Java and C++ for Android and Objective C code for iOS. However, this doesn’t imply that you can just download an app from Google play or the Apple app store and have it work. Developers have to use the conversion software to run it.

One of the major attractions of this operating system is it brings everything together – Start, Taskbar and Action center improvements as well as polishes Continuum and Task View and provides enhanced experience for Virtual Desktops – it consists of new mail and calendar apps.

Microsoft has enabled developers to use Java and C++ code on Windows 10 and iOS developers on the other hand, can take the advantage of their existing Objective C code. Microsoft’s aim is to enable developers to migrate their code across with minimal changes and then subsequently leverage the capabilities of Windows like Cortana, Xbox Live, Holograms, Live Tiles and much more. Microsoft has been testing its new tools with some versatile developers like King, who is pioneered to have developed the Candy Crush Saga on Windows phone – has been converted from iOS code using Microsoft’s tools without any changes. 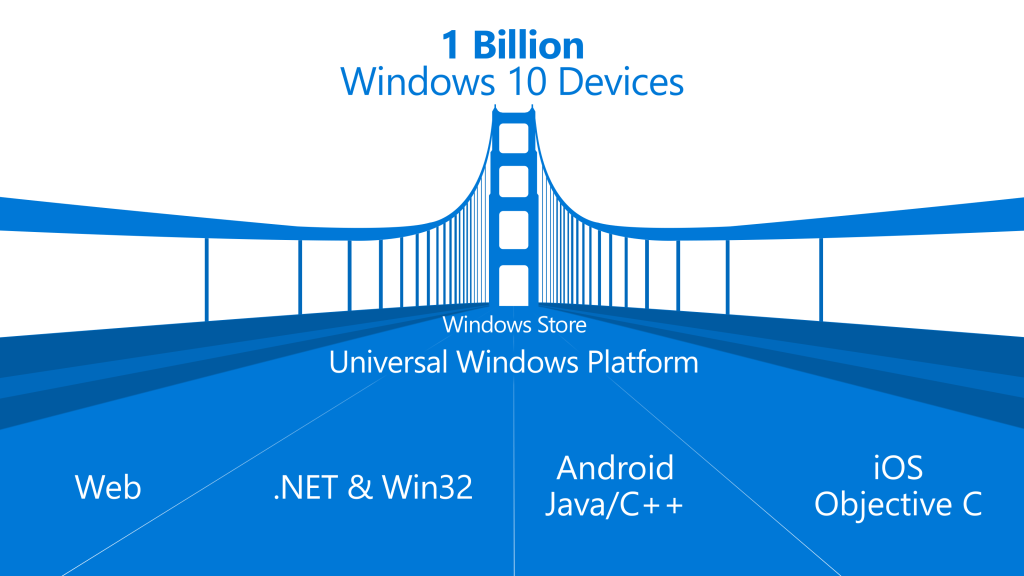 Along with the iOS and Android SDKs, Microsoft is strategizing the method for websites and windows desktop apps to make their way over to Windows universal apps. Microsoft has developed a model, wherein websites can run inside a Windows universal app and use system services like notifications and in-app purchases. This way, it becomes easier for website owners to create web apps with minimal effort and publish those apps in the Windows store. It may not serve as a best alternative to native apps for a variety of scenarios, but for simple websites it means a lot – offers a new way to create an app, eliminating the need for its developers to learn new coding languages. Apart from that, developers will also be able to leverage their .NET and Win32 apps work and migrate them to Windows universal apps.

Using some of its HyperV work, Microsoft is virtualizing these existing desktop apps on Windows 10. Adobe is one specific test case, where Microsoft has been working closely with the firm to package its apps to make it market ready for Windows 10. Using this virtualization technology, Adobe Photoshop elements will be available on the Windows Store as a universal app. Since performance is the key issue for many desktop apps, it will be quite intriguing to know if Microsoft can manage to maintain a solid app experience with this virtualization. 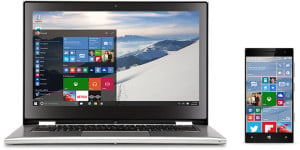 What does that mean to Microsoft?

Collectively, Microsoft is referring to these four new SDKs as bridges or ramps to make developers interested in Windows 10. Microsoft considers this as a crucial moment to really win back developers and set a firm footing that Windows has a place still existing in this world, where Android and iOS are still dominating. The goal is to get Windows on one million devices within the next two to three years.

That’s a pretty big goal, considering that Microsoft still has the tricky mix of ported apps to contend with, which could result in an app store, just like what Amazon has or even challenging, where developers would be uninterested to port their apps. This is just a small beginning and Windows universal apps, though promising still has a rough road ahead.

How will Innovapptive support the Windows 10 operating system?

Innovapptive will offer Windows 10 support and enable all its apps (around 77+) that currently run on Android and iOS platforms to be compatible with Windows 10. That means a promising opportunity for customers on Windows 10 to seamlessly adopt one of the largest portfolios of Enterprise Mobile applications.

What else is in our toolbox:

What is a Connected Worker?
Industrial organizations have used digital tools like Enterprise Resource Planning (ERP), Enterprise Asset Management (EAM) and Customer Relationship...
Read More
How Configurable Digital Forms Transform Maintenance and Operations
The Information Age is more than 50 years old but you wouldn’t know it looking around a lot of industrial organizations in 2021.  Many companies...
Read More
Achieving Optimal Opportunistic Maintenance with a Mobile EAM Solution
Time-based and condition-based maintenance strategies are effective in enhancing equipment reliability, but they can come at high downtime costs,...
Read More
Utility Speeds Meter Activations Using Mobile Work Order Management Solution
One of the biggest drivers of digital transformation is being able to accomplish what was impossible with paper-based processes. That’s exactly why...
Read More
Mobile Work Order Management Transforms Maintenance for CBH Group
Thirty thousand work orders is a lot of paper. That’s how much CBH Group produced in a single year while dispatching maintenance technicians to...
Read More
How Mobile EAM Solutions Drive Industrial Transformation in Chemical Companies
Chemical plants are hazardous facilities full of toxic and highly inflammable raw materials. Proper maintenance — and the ability to access...
Read More
How to Effectively Leverage Time-Based Maintenance Strategies
Changing your oil and rotating your tires every 3,000 miles or getting your teeth cleaned every six months are classic examples of time-based...
Read More
Why Chemical Plants Need Mobile Work Order Management and Digital Operator Rounds
Chemical plants are, by their very nature, dangerous places. Hazards abound around every corner. It’s no surprise that chemical plant managers and...
Read More
Making Safety Training Lessons Stick with Digital Work Instructions
A massive explosion rocked the Phillips Petroleum Company’s Pasadena chemical plant on October 23, 1989. It shook the area, registering 3.5 on the...
Read More